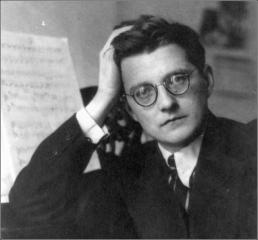 Encouraged by Alexander Glazunov during the initial years of his education, Dmitri Shostakovich received a solid training at the Petrograd Conservatory in piano with Leonid Nikolayev and composition with Maximilian Steinberg. Following completion of his studies in 1925, he joined the “Association for Contemporary Music.” He met Berg, Honegger and Milhaud in person. After his first successes and a brief experimental creative phase, the opera “Lady Macbeth of Mtsensk” marked a definite turning point in his artistic life.

As a result of Stalin’s devastating criticism published in “Pravda” in January 1936, the opera was dropped after a successful series of performances and only 25 years later newly issued in a milder version by the composer under the title “Katerina Ismailova.” After withdrawing his modernistic Fourth Symphony, he wrote the more accessible Fifth Symphony which gained him a professorship at the Leningrad Conservatory in 1937. His Seventh Symphony became a symbol of resistance against German aggression during the Leningrad blockade.

Having moved to Kuibychev during the war, Shostakovich moved to Moscow in 1945 where he was granted a professorship in composition at the Conservatory there. The state criticism of his Symphonies Nos. 8 and 9, which did not represent the hope-for triumphal glorification of the Soviet victory over Nazi Germany, peaked in 1948 in a sharply formulated Central Committee decree designating the music of Shostakovich and other Russian composers as “formalistic” and “alien to the people.” He temporarily lost his teaching positions. After Stalin’s death Shostakovich attained more recognition in the Soviet Union, thanks above all to numerous performances and honours abroad, where he now frequently travelled.

From 1957 to 1968 he was the Secretary of the Composers’ Union of the USSR, joined the Communist Party in 1960 and was elected to the Uppermost Soviet in 1962. The last years of his life were marked by serious illnesses.

Alongside Igor Stravinsky and Sergei Prokofiev, Dmitri Shostakovich may be regarded as the most important Russian composer of the 20th century. He wrote music for nearly all genres – ranging from silent film music, 15 symphonies and 15 string quartets, magnificent chamber and piano music to his world-famous orchestration of Vincent Youmans’ “Tea for Two.” He is spiritually related to Gustav Mahler in his treatment of the orchestra and instrumentation. His relationship to the political system in the socialistic and Stalinist Soviet Union was outwardly ambivalent. His efforts in behalf of the system, as well as his rebellion against it, influenced his life and personality to an extraordinary degree.