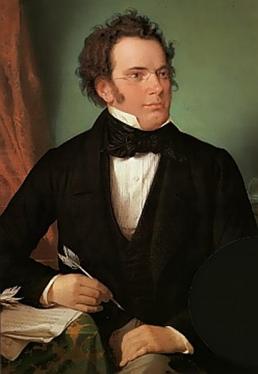 Born on January 31, 1797, in Himmelpfortgrund, Austria, Franz Peter Schubert demonstrated an early gift for music. As a child, his talents included an ability to play the piano, violin and organ. He was also an excellent singer.

Franz was the fourth surviving son of Franz Theodor Schubert, a schoolmaster, and his wife, Elisabeth, a homemaker. His family cultivated Schubert's love of music. His father and older brother, Ignaz, both instructed Schubert early in his musical life.

Eventually, Schubert enrolled at the Stadtkonvikt, which trained young vocalists so they could one day sing at the chapel of the Imperial Court, and in 1808 he earned a scholarship that awarded him a spot in the court's chapel choir. His educators at the Stadtkonvikt included Wenzel Ruzicka, the imperial court organist, and, later, the esteemed composer Antonio Salieri, who lauded Schubert as a musical genius. Schubert played the violin in the students' orchestra, was quickly promoted to leader, and conducted in Ruzicka's absence. He also attended choir practice and, with his fellow pupils, practiced chamber music and piano playing.

In 1812, however, Schubert's voice broke, forcing him to leave the college, though he did continue his instruction with Antonio Salieri for three more years. In 1814, under pressure from his family, Schubert enrolled at a teacher's training college in Vienna and took a job as an assistant at his father's school.