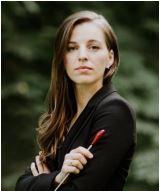 Award-winning german conductor Johanna Malangré has been noted for her electrifying musicality and charismatic leadership. She is passionate about communicating the fascinations of orchestral music to a wider public and is developing a special interest in curating programmes, aimed at introducing new audiences to classical music. After a masterclass with the City of Birmingham Symphony Orchestra, orchestral musicians praised her as 'a natural conductor'.

In autumn 2019 Johanna Malangré took up the appointment as Music Director of the HILDAGO Festival Orchestra in Munich. As a new festival for young classical music, under the patronage of Christian Gerhaher, HIDALGO aims to bring classical music of the highest standard to different locations within the city, combining high culture, mainstream and niche and to break down the boundaries between the genres. Other recent successes include her debut with the Münchener Symphoniker aswell as returning to the Bergische Symphoniker. Highlights of the upcoming season are an invitation to the Philharmonisches Orchester Kiel and a project at Lucerne Symphony Orchestra.

It was in Lucerne that Johanna first gained international attention as Conducting Fellow at the 2017 Festival Academy, working with Heinz Holliger and Patricia Kopatchinskaja. Recently she was invited back as Assistant Conductor for the Roche Young Comission and the Academy Orchestra in summer 2020 and 2021.

At the 2019 MAWOMA Conducting Competition in Vienna, Johanna was awarded first prize, audience and orchestra prize winner by a jury that included the Director of the Vienna State Opera, Dominque Meyer. Johanna Malangré began her conducting career in 2012 as Assistant Conductor at the Chamber Opera Cologne where she collaborated on numerous productions. In the past seasons she has conducted Dvořaks “Rusalka” at Pilsen Opera and worked with the Staatstheater Cottbus Orchestra and the Meininger Hofkapelle. She was Assistant Conductor to the Bergische Symphoniker in the 2016/2017 season, assisting music director Peter Kuhn and leading several concerts as well as the annual open-air gala. 2018 saw Johanna's debut with the Suddeutsche Philharmonie Konstanz and the Musikcollegium Winterthur and a renewed collaboration with Bern Symphonie Orchester, conducting their series of educational concerts on numerous occasions. Other orchestras she has worked with include the Thessaloniki State Orchestra, Hungarian State Opera Orchestra, Munich Youth Orchestra and Hradec Symphony Orchestra.

Johanna is a graduate of the renowned conducting class of Prof. Johannes Schlafli in Zurich and has been coached by mentors including Bernard Haitink, Paavo Jarvi and Nicolas Pasquet.